The Demise and Rise of Bunny Lamar

As Part of: PRIDE HOUSE MANCHESTER

‘Bunny Lamar’s academy for the dramatic arts is full of snotty kids and pushy mothers, who dreams of fame and fortune are eclipsed only by that of Bunny himself. Bunny’s been in the “business” they call “show” since the womb but the panicle of his career was three summer seasons being Barney, the purple dinosaur at Butlins in Minehead.

Dorian’s mam sends him and his two sisters to Bunny’s drama school, not that she’s pushy but so she can have an illicit affair with her driving instructor, Reg. The kids only find out about it when their mother antics with randy Reg appear in the paper and gain her a fifteen-minute feature on “This Morning”.’

Stay after the production on Wednesday the 19th for Lodge Bars Fantastic Quiz with cash prizes to be won!

Get your tickets now from
https://www.wegottickets.com/event/258358 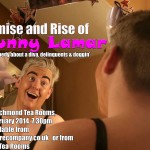